What Time is it? Just watch the fountain. 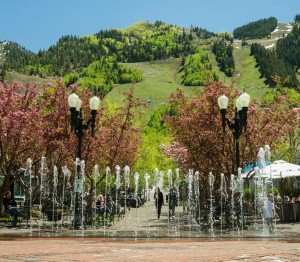 The fountain tells you what time it is.

Now sometimes the fountain is busy choreographing it’s dance and will not stop to tell the time, but most of the time it finds a way to fit in a few seconds to tell us all the time.

Want a hint to help figure out when the fountain is telling the time?

Watch closely, It does not take much of a break out of it’s dancing to display the time, so you will want to keep a close lookout.

You are looking for a pattern in the water spouts that starts on the western side of the fountain and pulses on and off for 15 seconds, like a flashing clock.

How a computer crash almost stopped the music for Aspen’s Dancing Fountain.

When semiconductor savant Nick DeWolf unveiled the randomized rhythm behind Aspen’s Dancing Fountain in 1981, he proudly declared that its secret commands would die with him. Shortly before health issues swallowed his life in 2006, however, he had a change of heart. And so DeWolf scrambled to do what any savvy programmer would: back up his machine.

Then, in early 2009, before the fountain was to reawaken for its thirtieth summer of slapdash spritzing, the Aspen Parks Department contacted the fountain’s sculptor, Travis Fulton, and its mechanical engineer, Peter Hutter, in a panic. All three of the fountain’s replacement computers had crashed, taking the machine-specific code that conducted DeWolf’s aquatic symphony with them. The Dancing Fountain was one glitch away from standing still forever.

Searches for an engineer who could decipher DeWolf’s formula, which was written in Assembly Language, stretched across the region, the state, even the country, to no avail. But months later, as Fulton and Hutter were overseeing a sculptural land-reclamation project in Old Snowmass, fate intervened. The operator of a front-end loader pushing boulders around overheard a conversation.

“Peter and I were bemoaning how we couldn’t find anyone to resuscitate the dance out of the old computers,” Fulton says, “and here’s this guy sitting on an earth-moving machine who says he speaks all six major computer languages!”

“The program actually has, we termed it, its own soul,” Hollingsworth explains. “It’s not like the [imitator] Bellagio Fountain in Las Vegas that runs a script and does what it’s told to do. The Aspen fountain is given a set of tasks it knows how to do. It decides what it wants to do, when it wants to do it. It’s the first iteration of a complex randomizer—a fifteen-minute cycle won’t repeat for hundreds of thousands of years.”

The inventor, we think, would be relieved: today his brainchild boogies on.